How the humble checklist can squash mistakes & improve execution

No matter what you do in life (unless maybe you’re a buddhist monk) by systematically using checklists you can eliminate errors and oversights, and improve your results.

This is the main premise of the book The Checklist Manifesto by Atul Gawande.

He uses fascinating examples from medicine, aviation and even VC investing to illustrate his thesis that checklists are an invaluable yet under appreciated tool.

I will share a couple of the diverse cases Gawande uses to prove his point. 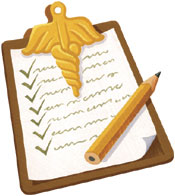 Checklists in the medical field

In the US, approximately 90,000 people are admitted to intensive care every day. According to a study, the average IC patient will need 178 individual actions per day, such as the administration of drugs, checking of vital stats, bathing etc, and will suffer an average 1.7 mistakes per day — some of them potentially fatal. With average error rates like this, it’s easy to see how some could be dissatisfied by the status quo!

For the first proof of the power of the checklist, we must turn our attention to how they were applied to “line infections”. Line infections are caused by intravenous lines becoming contaminated. Each year in the US, approximately 5,000,000 lines are put in patients, and infections of these lines are so common they are considered a routine complication.  Statistics show that after 10 days, 4% of these lines become infected, leading to 80,000 people per year being affected. These infections are fatal between 5-28% of the time, depending on how serious the patient’s sickness was. Line infection survivors spend one week longer in intensive care.  As you can see, it’s a pretty grim picture.

Checklists to the rescue!

A critical care specialist came up with a simple checklist of steps to avoid line infections:

The first hospital that implemented this checklist gave nurses some extra responsibility, including the authority to stop doctors from inserting a line if they saw a step skipped.

The results were remarkable; the 10 day infection rate went from 11% to ZERO, and only 2 infections were recorded in the next 15 months.  The conclusion was that in this hospital alone, this simple checklist prevented 43 infections, 8 deaths and saved $2,000,000 in costs over the 15 month period. 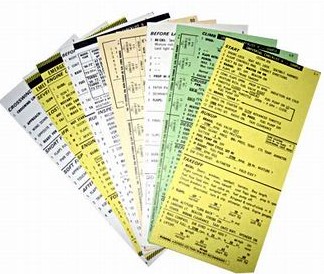 In 1935, the U.S. Army Air Corps had a contest for airplane manufacturers who wanted to build the military’s next-generation bomber. Boeing Corporation entered its Model 299 which carried five times as many bombs as the army had requested and had almost twice the range of previous bombers.

Shortly after takeoff on its demo flight the plane crashed, killing two of its five crew members (including the captain). The army had planned to order sixty-five of the aircraft but instead ordered Douglas’s airplane instead – almost sending Boeing into bankruptcy.

The crash investigation revealed nothing mechanical had gone wrong with the 299 and the crash was attributed to “pilot error.” The report also noted flying the 299 was substantially more complex than previous aircraft. The pilot had been so busy handling this complexity he had forgotten to release a simple lock which caused the crash.

Since the plane was a masterpiece, some pilots got together to figure out how to make the 299 more user-friendly. They did not suggest more pilot training–the test pilot was the most senior flight tester and none had more experience than him. Instead, this ad-hoc group came up with a simple approach to the complexity – they created the first pilot’s checklist. Flying this new plane was too complicated to be left to the memory of any one person, even a leading expert.

Their checklist was simple enough to fit on a single index card. It listed step-by-step what was to be done before takeoff, during flight and landing. It didn’t have anything out of the ordinary, just routine procedures, but the fact that the trivial steps were documented & followed allowed the Model 299 to be flown 1.8 million miles without incident.

Ultimately, thirteen thousand Boeing Model 299s were ordered, giving the US a decisive air advantage in World War II. The B-17 would go on to become the backbone of the Allies’ devastating bombing campaign which ultimately led to the surrender of Nazi Germany. What started out as a disaster for Boeing ended up giving the allies a critical advantage in World War II, with checklists playing an important role.<

Today’s pilots carry handbooks made up of hundreds and hundreds of checklists. They include standard checklists for everyday aircraft operations that they follow religiously, and exceptional checklists which cover every conceivable emergency situation a pilot might run into. These are the ones they hope they will never use! One could say that pilots do their entire job supported by checklists.

Here’s an example of a rough checklist I created to support the creation of a new Google Adwords account for clients:

Even though this checklist & procedure are simple, there are multiple opportunities for mistakes and oversights.  By executing with checklist in hand these will be eliminated, with any refinements of the process getting added. You can see how this discipline would support kai-zen, or constant improvement!

I hope that you have gained some value out of this post (it sure took me long enough!). If you really enjoyed the examples from the book I you could read it, but frankly in the time it would take you to read the book you could create all the checklists you need to run your own processes and have gained all the benefits he is proselytizing. I’d lean towards that being a better use of your time!

in a future post I will be sharing the story of Van Halen’s rock concert tour company, and how they used brown M&M’s to figure out if their event was at risk of severe (fatal) disaster. How’s that for a cliffhanger!